Posted on September 8, 2011 by sixstrstories

Sometimes, in my teaching, one of my guitar students will ask if I can teach him/her how to play a favorite song that he/she has recently been listening to. Sometimes that song is so new or obscure that there is no transcription available either in a songbook, guitar magazine or on the internet. Often, it is a song I’ve never heard before.

All the student has is a recording of the song and a good bit of faith in my ears and expertise to be able, in about 45 minutes, to unlock the mysteries of exactly what is going on musically and guitaristically (?) in this piece of music that he/she is dying to be able to play.

Every now and then there is a song that I want to learn how to play and, again, only have the recording to work with.

Recently, that song was the 1933 Ashley & Foster recording of “Rising Sun Blues.”

Having often listened to, read much and written once (see my September 6, 2010 blog post) about this recording, I started my detective work based on the assumption that on the record, Clarence Ashley played guitar and sang and Gwen Foster played harmonica.

Active listening, as I call it, reveals details that passive listening does not. Active listening requires repeated listenings. What I heard as an active listener of “Rising Sun Blues” told me something that was contrary to my initial assumption:  it sounded like there was more than one guitar being played behind the vocal and the harmonica.

That opening guitar lick is played on one guitar. But at the very end of it, just before the vocal starts, there is the hint of a low bass note that sounds like it is coming from another guitar.

In the accompaniment to the first verse, right at the word “God,” another low bass note appears.

Then, the instrumental break between the first and second verse clinches the deal. Guitar 1 repeats that opening lick and is obviously accompanied by another guitar, playing Carter-style. Guitar 2 then hits the lowest bass note of all on the first beat of the measure where the second verse begins: “Just fill the glass up to the brim…”

Did you hear those bass notes?

Well. Who is playing the other guitar?

In my library, I have a book: Country Music Originals: The Legends and The Lost by Tony Russell. (Great book!) In the book, there is a chapter on the “Carolina Twins,” a duo that recorded for Victor Records from 1928-1929. The members of the duo were David Fletcher and Gwin Foster. (His recordings always use the spelling “Gwen” but his gravestone has it as “Gwin,” according to Mr. Russell.)

And there is a picture. 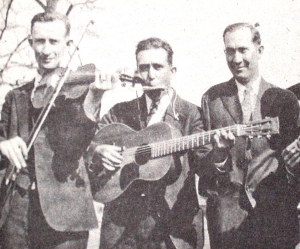 In between fiddler Gordon Buford and singer Avery Keefer, that is Gwin Foster himself, playing a C chord on his guitar while (thanks to what looks like a homemade, round-the-neck rack) blowing into a harmonica at the same time! Shades of Bob Dylan!

(The photo dates to around 1926 and is credited as being from the “Wayne Martin collection.” Robert Zimmerman was 15 years away from even being born.)

So, that solves the two guitar question.

But it raises another: why didn’t, or couldn’t, the player of Guitar 1 hit that bass note on his guitar?

Well, once upon a time, in my formative years, I had seen a film (probably on PBS) of the sixties Folk trio Peter, Paul & Mary in concert. I noticed that while accompanying Mary, Peter and Paul rarely played the same thing on their respective guitars. One of them would be playing with his guitar capoed up the neck while the other wasn’t using a capo and was playing different but harmonically equivalent chord voicings down in open position.

A capo is a device made up of a bar of some sort (covered in hard rubber or slightly soft plastic) that uses the pressure provided by elastic bands or a spring to simultaneously press all six guitar strings against the same fret, as chosen by the player. The vibrating strings are now shorter and thus sound notes of a higher pitch.

Back to the book.

Guess who was in the Carolina Tar Heels?

And… there’s a picture! 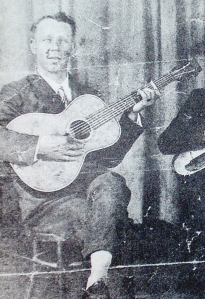 That’s Clarence Ashley, from 1928, thanks to Mr. Russell’s photo collection.

See his left hand? See that white line across the guitar’s fingerboard just above his fingers?

The 1933 recording of “Rising Sun Blues” features the guitar and harmonica work of Gwen/Gwin Foster and the vocals and guitar work of Clarence Ashley.

In case you were wondering.

If you’ve got the time, scroll back up to the link and listen to it again.