Among the many music books that I made frequent use of in my musically formative years and that still fill my shelves, one of the most memorable is a collection of songs recorded by Judy Collins. 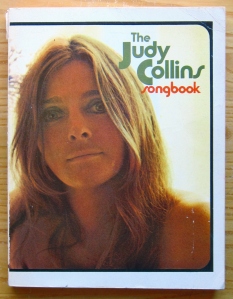 The Judy Collins Songbook was first published in October, 1969. It contains piano/vocal/guitar arrangements – arranged and edited by Herbert Haufrecht – to 55 songs from Ms. Collins’ first eight albums. Starting with “A Maid Of Constant Sorrow,” the traditional Folk classic and title song from her first album released in 1961, and finishing with “My Father,” an original composition from her 1968 album Who Knows Where The Time Goes, the thick volume also contains “comments, instructions and reminiscences by Judy Collins.”

The instructions accompany only a handful of songs but include such valuable (to a young guitarist) insights as: “I play this with a Travis style pick, in a regular tuning” (“A Maid Of Constant Sorrow”) and “If you want to do this like it is on my record, tune the sixth string to D, and capo up two frets. That puts your E chord in the D position” (“John Riley”).

The comments that accompany the songs are more frequent. With the Malvina Reynolds & Barbara Dane song, “It Isn’t Nice,” Ms. Collins writes: “I hope that when I am as old as Malvina is I am as young as she has been all her life.” With “My Ramblin’ Boy” by Tom Paxton, she relates: “One night in a Detroit theatre a stage hand told me this was the best song he had ever heard and made me write the words out on an unrolled paper cup.”

Of all her comments and reminiscences, the one that to me is the most memorable, is the one included with the music for the Bob Dylan song, “Mr. Tambourine Man.”

On page 104 of her songbook, Judy Collins wrote: “I slept in the attic of Bob’s house in Woodstock one night in 1965. From the little stone-walled writing room at three in the morning I heard this whole song for the first time, with the moon full and the house still except for his singing and guitar.”

Judy Collins’ recording of “Mr. Tambourine Man” can be found on her 5th Album, released in 1965.

P.S.: If you’d like to read another “This Historic Day In Music” post celebrating Judy Collins’ birthday, visit the archives for May, 2012. You’ll be glad you did!

This entry was posted in Posts with Video, This Historic Day In Music and tagged Bob Dylan, I Am A Maid Of Constant Sorrow, Judy Collins, Mr. Tambourine Man, The Judy Collins Songbook. Bookmark the permalink.