Posted on February 4, 2015 by sixstrstories

Last April, I wrote a This Historic Day In Music post about “Buck Dancer’s Choice” and “The Franklin Blues”: the first Country Music guitar instrumentals to be put on record.

The guitarist on those recordings was 32-year-old Tennessean Samuel Fleming McGee. Sam recorded both pieces on April 14, 1926 in a New York City recording studio. Sam and his brother Kirk, a banjo player and fiddler, were frequent performers on the Grand Ole Opry and long-time members of a Country band led by Uncle Dave Macon called The Fruit Jar Drinkers.

Writing about and listening to “Buck Dancer’s Choice” led me to want to try my hand at playing the piece, so I went looking for a transcription of it. My copy of Fingerpicking Styles for Guitar (Oak Publications, 1966) by Happy Traum had sheet music for “Buck Dancer’s Choice,” but the transcription was taken from a rather different version of the piece that Sam McGee had recorded in 1964. Most of what I found on-line in the “Guitar TAB” websites that I searched turned out to be variations on the Happy Traum transcription.

I soon realized that if I wanted to play the original 1926 version of “Buck Dancer’s Choice,” I was going to have to figure it out for myself.

And, if I wanted to be able to share what I’d figured out with another guitarist, I would have to transcribe it. 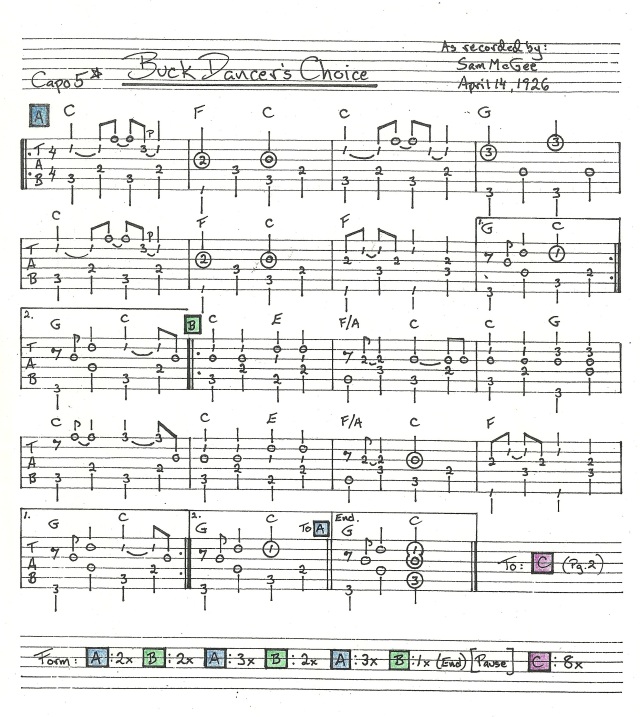 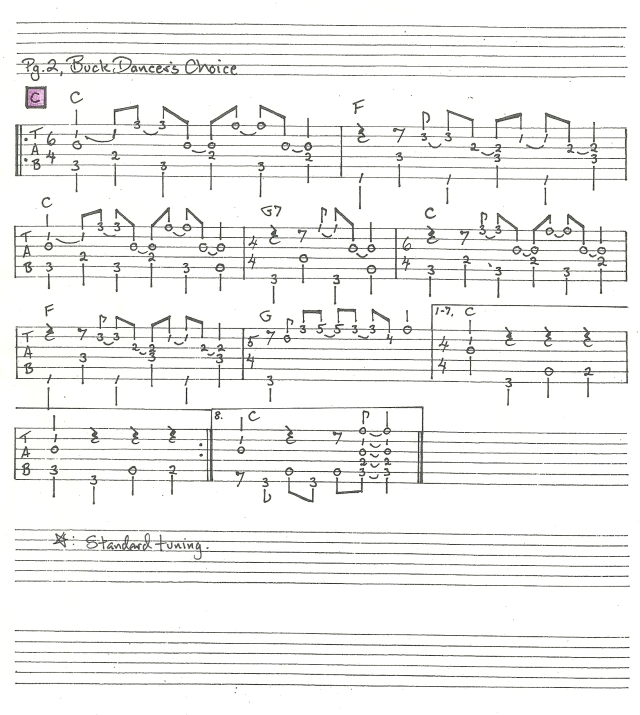 That’s what’s known as Guitar Tablature. Tablature is a system of notation used to write down music for fretted stringed instruments that originated in Europe during the 15th century. The basic concept of tablature is that the horizontal lines represent the strings of the instrument and the numbers on those lines tell the player what fret that string (or strings) should be fingered at to get the desired pitch or note.

Here is the recording that started all of this: Sam McGee playing “Buck Dancer’s Choice” as he recorded it on that now-historic day, April 14, 1926. See if you can follow the transcription as you listen!

If you are a TAB-reading guitar player, I hope you’ll take a shot at playing “Buck Dancer’s Choice” from my transcription. (I’m getting better at playing it, but not yet at Sam’s tempo!) Let me know how you think I did transcribing it!

Also, if you have any guitar-playing friends that you think would be interested, please pass a link to this post along to them.

Good music doesn’t get old, especially when it’s this much fun to play or just to listen to.