It just so happens that three of my favorite guitarists were born in the month of March.

I have, of course, written about these gentlemen here in sixstr stories before now.

Wes Montgomery got his “This Historic Day In Music” write-up on March 6, 2012.

Lightnin’ Hopkins was featured in a “This Historic Day In Music” post on March 15, 2012 and on March 17, 2011, I wrote my one-and-only “The Day Before Yesterday In Music History” post about the illustrious Mr. Hopkins.

I hope you’ll visit the Archives and check out some – or all! – of those pieces.

This year, I thought I’d let Doc, Wes and Lightnin’ speak for themselves. (Mostly.)

Here’s Doc Watson playing and singing “Sitting On Top Of The World.”

“Sitting On Top Of The World” was written by singer/guitarist Walter Vinson and fiddler Lonnie Chatmon. Performing as “The Mississippi Sheiks,” they recorded the song for OKeh Records in 1930. Doc Watson first cut “Sitting On Top Of The World” for Folkways Records in April, 1962, but the recording was not released until 1994 when Smithsonian Folkways included the track on the 2-CD set The Original Folkways Recordings of Doc Watson and Clarence Ashley.

The album pictured above, Classic Appalachian Blues, is a 2010 Smithsonian Folkways compilation that puts Doc’s rendition of “Sitting…” in the very good company of songs by 19 other Blues artists including Sticks McGee, John Jackson, Pink Anderson and Etta Baker.

Up next, here is Wes Montgomery playing “While We’re Young.”

“While We’re Young” was written in 1943, music by Alec Wilder & Morty Palitz and lyrics by Bill Engvick. Wes Montgomery recorded his solo electric guitar version on August 4, 1961 at Plaza Sound Studios in New York City for Riverside Records. The track was released on Wes’ album So Much Guitar in 1961. 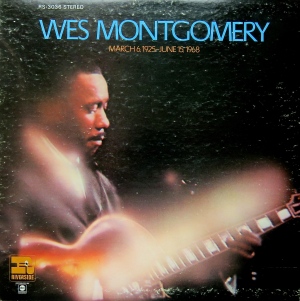 “Penitentiary Blues” is a Lightnin’ Hopkins original. The song was one of nine recorded on January 16, 1959 in a session organized by Blues historian and author Samuel B. Charters. The “studio” was a small rented room at 2803 Hadley Street, Houston, Texas. Having first provided a guitar and a bottle of gin, Mr. Charters then operated the tape recorder and held the microphone as Mr. Hopkins sang, played and reminisced. The resulting album, Lightnin’ Hopkins, was released on Folkways Records later that year.

Now, I often enthusiastically exclaim to my guitar students that “The World of Guitar is a wide and wonderful place!”

If a student were to question that statement, should ask for an example, for some kind of demonstration of the width and wonderfulness of the World of Guitar, I’d immediately introduce him or her to Doc, Wes and Lightnin’.

1 Response to This Historic Month In Music: Doc, Wes & Lightnin’