Posted on September 8, 2015 by sixstrstories

“Of all my inventions, I liked the phonograph best.” 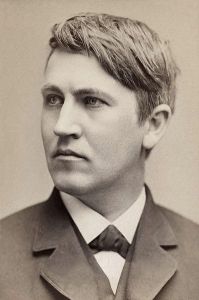 Thomas Edison wrote the date – November 29, 1877 – in the upper right-hand corner of the piece of paper on which he had drawn the sketch of his design for a new invention.

Working that Thursday at his Menlo Park, New Jersey laboratory, Edison had combined the results of his experiments on “an automatic method of recording telegraph messages” with what he’d learned from his experiments on the telephone about “the power of a diaphragm to take up sound vibration.” The “little machine” he envisioned used “a cylinder provided with grooves around the surface.” Over the cylinder “was to be placed tinfoil, which easily received and recorded the movement of the diaphragm.”

Thomas A. Edison called the invention in his sketch a “phonograph.” 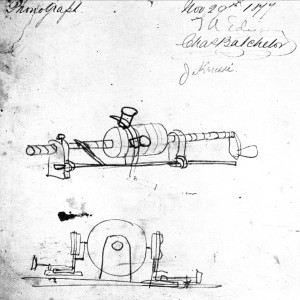 Edison gave the sketch (shown above) to John Kruesi (1843 – 1899), the Swiss-born machinist that he considered to be the best in his employ at Menlo Park. 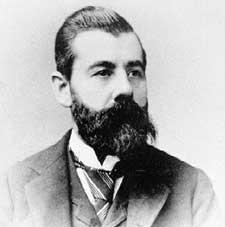 John Kruesi’s job was to build a prototype of the machine from Edison’s sketch. When he had nearly completed the task, Kruesi asked Edison what the machine was for. Edison told him, “I was going to record talking, and then have the machine talk back.” Kruesi thought that Edison’s idea was “absurd.”

In early December of 1877 (possibly as early as Tuesday, December 4), John Kruesi presented Thomas Edison with the finished prototype of his phonograph.

The “cylinder provided with grooves around the surface” is in the middle of the machine. The cylinder’s surface is inscribed from end to end with a helical or spiral “indenting groove.” A screw-threaded shaft runs length-wise through the center of the cylinder. Each end of the shaft is held by a vertical support, keeping the cylinder suspended above the base plate. A wooden crank handle is attached to one end of the shaft. When the crank is turned, the cylinder/shaft unit simultaneously rotates and moves horizontally between the two vertical supports.

To the right of the cylinder stands the mouth piece or “speaking tube.” A metal diaphragm with a metal “indenting-point” attached to its center covers the end of the speaking tube closest to the cylinder.

To the left of the cylinder is the shorter “reading tube.” This tube is also outfitted with a metal diaphragm and an attached indenting-point on the end facing toward the cylinder.

Here’s a close-up of the speaking tube and part of the cylinder and the threaded shaft.

“So,” John Kruesi might have asked, “how does this machine record talking?”

Position the cylinder so that the beginning of the indenting groove is opposite the indenting-point on the speaking tube’s diaphragm.

Wrap a thick sheet of tinfoil smoothly and completely around the cylinder.

Adjust the speaking tube towards the cylinder so that its indenting-point makes contact with the tinfoil and presses the tinfoil slightly into the indenting groove.

Lean over and speak loudly into the open end of the speaking tube.

The resulting sound waves within the speaking tube cause its diaphragm to vibrate. The indenting-point pulsates in and out against the moving tinfoil, forming a continuous trail of hill-and-dale-like indentations along the track provided by the indenting groove on the rotating and horizontally-moving cylinder.

When finished, the “recording” of the sound of the operator’s voice will lie in the spiral groove that has been “easily received” by the tinfoil.

“How then,” the still-doubtful Kruesi might have continued, “does the machine talk back?”

Adjust the speaking tube back away from the cylinder.

Turn the crank in the opposite direction until the cylinder is rewound to its original position.

Adjust the reading tube towards the cylinder so that its indenting-point is resting in the beginning of the spiral groove inscribed into the tinfoil.

Turn the crank handle in the same direction and at the same speed as during the recording process.

The very first time Thomas Edison tried his phonograph – he recorded himself reciting the poem “Mary Had A Little Lamb” – it worked.

“I was never so taken aback in my life,” Edison later recalled. “I was always afraid of things that worked the first time; but here was something there was no doubt of.” Thomas Edison’s first phonograph showed “that speech and song could be actually recorded, preserved and reproduced” by the same machine.

On December 15, 1877, Thomas Edison signed an application to the United States Patent Office asking to be awarded a patent on his invention of a “Phonograph or Speaking Machine.” (The date on which an application for a patent is signed is known as the “execution date.” It is considered to be “the date in the patenting process that comes closest to the time of actual inventive activity.”)

In the application, Edison makes this opening statement about his phonograph:

“The object of this invention is to record in permanent characters the human voice and other sounds, from which characters such sounds may be reproduced and rendered audible again at a future time.”

“Mr. Thomas A. Edison recently came into this office, placed a little machine on our desk, turned a crank, and the machine inquired as to our health, asked how we liked the phonograph, informed us that it was very well, and bid us a cordial good night.”

Towards the end of the article, Scientific American summarizes Thomas Edison’s phonograph as being: “a little affair of a few pieces of metal, set up roughly on an iron stand about a foot square, that talks in such a way, that, even if in its present imperfect form many words are not clearly distinguishable, there can be no doubt that the inflections are those of nothing else than the human voice.”

(FYI: Page 1 of the December 22, 1877 edition of Scientific American featured articles on and illustrations of “The Tuttle Family Knitter” and “The Foster-Firmin Amalgamator And Ore Washer.”)

On February 19, 1878, the United States Patent Office issued/awarded patent #200,521 to “Thomas A. Edison, of Menlo Park, New Jersey” for his “Phonograph or Speaking Machine” and/or “Improvement In Phonograph Or Speaking Machines.”

On February 28, 1878 and on March 19, 1879, Thomas A. Edison would execute applications for – and eventually be awarded – two more patents for inventions involving the phonograph and speaking machines.

By the summer of 1879, however, Edison had completely set the phonograph aside and was focusing his energy on perfecting the incandescent lightbulb.

Not until 1887 would Thomas Edison turn his attention back again to the phonograph. Working then in his new and much larger laboratory in West Orange, New Jersey, Edison would be awarded (from May 8, 1888 to May 16, 1933) another 196 patents for inventions concerning phonographs and sound recording.

In conclusion, here is one more quote from Thomas Edison.

The sources of the quotes, terminology, information and inspiration used in the writing of this post were:

The text of Thomas A. Edison’s patent application for “Improvement In Phonograph Or Speaking Machines” (December 15, 1877) – as found on the Rutgers University website, The Thomas Edison Papers, at: edison.rutgers.edu.