Posted on March 7, 2016 by sixstrstories

Waking up with a tune in my head on a morning when I could actually take the time to sit with my guitar and get notes down on paper was a gift.

Three days and dozens of stolen moments later, the bulk of “Before Breakfast” was done. 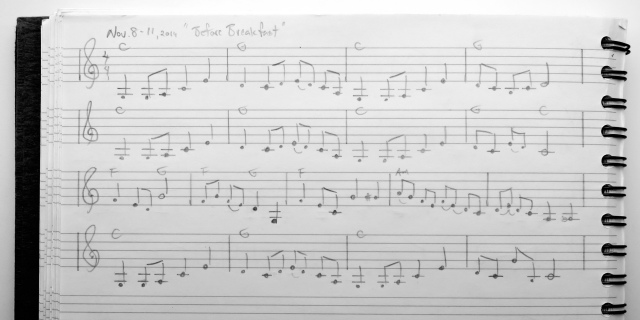 “Before Breakfast” dominated my repertoire for many months. However, it wasn’t until I added an intro/outro lick sometime last Summer that my compositon finally felt complete.

A couple of other pieces – fingerpicked arrangements of “Ain’t Misbehavin'” and “All My Loving” – eventually bumped “Before Breakfast” from my playlist. But this past Sunday – March 6, 2016 – I decided it was time to capture my “latest” original acoustic guitar instrumental in zeros and ones.

“Before Breakfast” – composed and performed by Eric Sinclair.

1 Response to “Before Breakfast”