The Ballad of “Eight Days A Week”

(Ballad: “A poem or song narrating a story in short stanzas, or verses.”)

Most likely it was in late September or on a day in very early October, 1964.

Paul McCartney excitedly arrived at John Lennon’s house with an idea – maybe a title – for a new song.

He’d been chatting with his chauffeur on the way there. “How’ve you been?,” Paul inquired. “Oh, working hard,” the driver replied. “Working eight days a week!”

And so “Eight Days A Week” was born. 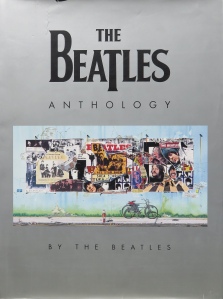 “We were always quick to write. We would write on the spot. I would show up, looking for some sort of inspiration; I’d either get it there, with John, or I’d hear someone say something.”

Paul also explained, “John and I were always looking for titles. Once you’ve got a good title if someone says, ‘What’s your new song?’ and you have a title that interests people, you are halfway there.”

“‘Eight Days A Week’ was a landmark recording in that it was the first time The Beatles took an unfinished idea into the studio and experimented with different ways of recording it.”

By all accounts, the “Eight Days A Week” idea that John and Paul brought to the late afternoon (3:00-6:45 pm) session consisted of two verses…

2) “Love you ev’ry day, girl/Always on my mind. One thing I can say, girl/Love you all the time.”

The song needed an intro, an outro and a “middle eight” – a third part (sometimes known as a “bridge”) different from the verse and chorus and usually eight measures long.

The intro and outro, however, proved to be more of a problem.

John and Paul tried multiple vocal arrangements going from a cappella vocals through various melodic sequences of harmonized “Ooohs” over acoustic guitar. By take six, the band had turned to an instrumental intro that they carried into the 7:00-10:00 pm recording session.

During the evening, over the course of seven more takes, vocals and handclaps were overdubbed and the recording – though still without an outro – was perfected. Take 13 was declared “best.”

Back in Studio Two on Sunday, October 18, The Beatles started an epic nine hour recording session by finally recording the outro piece for “Eight Days A Week.” It features a shimmering electric 12-string guitar part from George Harrison.

George Martin, Norman Smith and Ken Scott did the editing, mixing and mastering of “Eight Days A Week” on Tuesday, October 27 in Studio Two. It was here that Mr. Smith suggested the idea of having the intro “fade in”: start soft and gradually increase in volume; very much the reverse of the “fade out” commonly used at the end of Pop/Rock records.

“Eight Days A Week” would be the first Pop/Rock recording to start this way.

“Eight Days A Week” soon made its way into the world. 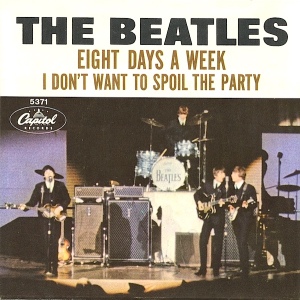 The Beatles VI LP sat in the #1 spot on the Billboard Top LPs album chart in the US for six weeks, starting on July 10, 1965.

“Eight Days A Week” b/w “I Don’t Want To Spoil The Party” was certified as a Gold Record by the Recording Industry Association of America on September 16, 1965. In the US, a Gold Record is earned for sales of 500,000 copies.

The Beatles never played “Eight Days A Week” in a live performance.

The only solo Beatle to play “Eight Days A Week” live was Paul McCartney. He did so for the first time on May 4, 2013 in a concert in Brazil.

In September of 1980, John Lennon was interviewed for Playboy magazine by David Sheff. Part of that extensive interview consisted of Lennon offering a song-by-song analysis of his music, both from his solo career and with The Beatles.

Ian MacDonald wrote about “Eight Days A Week” in his wonderful 1994 book Revolution in the Head: The Beatles’ Records and the Sixties.

I agree with Mr. MacDonald’s assessment: “On any list of Pop records that capture the soaring sunshine optimism of the mid-Sixties, “Eight Days A Week” would be near the top. It holds its place with its sheer verve and the embracing warmth of its sound, whose texture of carillon electric lead and chiming acoustics was so influential on the nascent American Folk-Rock scene.”

“Eight Days A Week” was the first Beatles’ song that I learned how to play.

More accurately, “Eight Days A Week” was the first Beatles’ song that I was able to figure out a way in which I could play it.

…presented “Eight Days A Week” – for some still unknown reason – in the key of B flat.

My novice guitar player fingers could not begin to penetrate the tangle of barre chords that one needed to play anything in the key of B flat.

But (somehow), I knew about transposing.

Confidently armed with a blue ballpoint pen, I crossed out that first nasty B flat major barre chord and wrote “G” above it. “A7” replaced the following C7 chord.

When I was done, the complete chord progression of “Eight Days A Week” lay before me in six, open-position chords that I could actually play: G, A7, C, E minor, D and D7!

Years later, being unable to find a published transcription of “Eight Days A Week” in the key of G, I wrote out a lead sheet of my own. 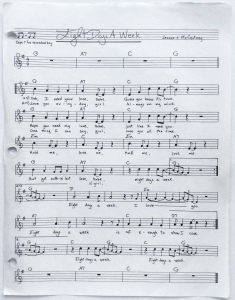 To this day, I use that hand-written piece of music to teach my novice guitar playing students how to play their first Beatles’ song.

4 Responses to The Ballad of “Eight Days A Week”