Posted on March 6, 2019 by sixstrstories

I bought my first Wes Montgomery album when I was in high school.

The purchase was made in Boston, Massachusetts, at one of the two music stores that used to stand on the block of Boylston Street in between Tremont Street and Charles Street. It was either Carl Fischer Music or Boston Music. I can’t remember which. 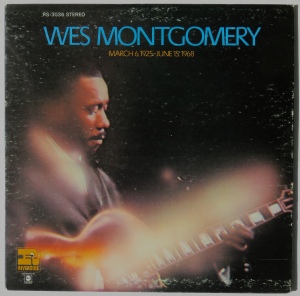 The LP was a compilation released by Riverside Records in October of 1968. Its nine tracks featured the electric Jazz guitarist with a variety of small ensembles doing distinctive takes on seven standards – including “Satin Doll,” “Groove Yard” and “Body and Soul” – and Wes’ own “Jingles.”

That was recorded on August 4, 1961 at Plaza Sound Studios in New York City. The album that it originally appeared on – SO Much Guitar! – was released on Riverside Records in 1961.

John Leslie Montgomery was born on March 6, 1925 in Indianapolis, Indiana.

He started playing on a 4-string tenor guitar at around the age of 12. When he was 19 and just married, he bought an electric 6-string guitar and an amplifier. His inspiration? “Charlie Christian, like all other guitar players. There was no way out. That cat tore everybody’s head up.”

With his new guitar, a record player, a stack of the records that Christian made with the Benny Goodman Sextet and Orchestra, infinite patience and an incredibly good ear, Wes taught himself to play all of Charlie Christian’s guitar solos note-for-note. Wes later explained: “I knew that everything done on his guitar could be done on mine… so I just determined that I would do it.”

It took him about eight months. And because much of the time he would be practicing late at night while his wife was sleeping, he got into the habit of plucking the strings with his thumb, which produced a softer sound than he would get if he used a guitar pick.

Wes’ ability to play Charlie’s solos got him his first gig around 1945 in Indianapolis. As Wes described it: “I got a job in a club just playing them. I’d play Charlie Christian’s solos, then lay out.”

As Wes improved and began to develop his own style, word spread. He was hired by vibraphonist Lionel Hampton and went on the road with Hampton’s big band from 1948-50. Later, in the mid-50’s, Wes played with his brothers Buddy and Monk in a group called The Mastersounds.

Wes Montgomery still stands as one of the greatest guitarists in the history of Jazz.

My sources for the information and quotes in this post were:

This entry was posted in Posts with Video, This Historic Day In Music and tagged "While We're Young", Jazz Guitar, Riverside Records, So Much Guitar, Wes Montgomery. Bookmark the permalink.

2 Responses to This Historic Day In Music: Wes Montgomery – Take 2