The Ballad of “Wayfaring Stranger”

Ballad: “A poem or song narrating a story in short stanzas, or verses.”

I’m just a poor wayfaring stranger, a traveling through this world of woe

But there’s no sickness toil or danger in that bright land to which I go.

The melody those lyrics are set to is one of my favorites.

It is one of the pieces I play pretty much every time I pick up my guitar.

It is what I play when I’m trying out a new guitar; my test to determine the true quality of an instrument’s voice.

Sheet music for “Wayfaring Stranger” first made its way onto my music stand decades ago in a songbook called Jerry Silverman’s Folk Song Encyclopedia, Volume 2. 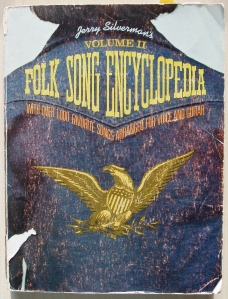 Published by Chappell Music Company in 1975, this large thick paperback does indeed contain “Over 1,000 Favorite Songs Arranged For Voice And Guitar.”

“Wayfaring Stranger” resides in the Gospel section, sharing pages 76 & 77 with two other classics. 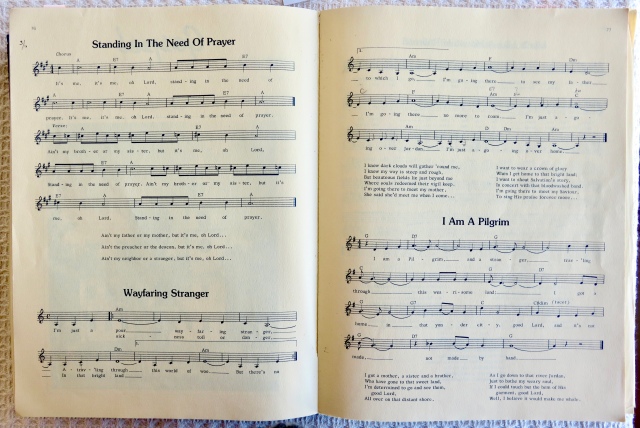 In 1941, the father & son song-collecting team of John and Alan Lomax published their third book of songs. Our Singing Country: A Second Volume of American Ballads and Folk Songs contained 205 songs. All but 13 of these were chosen from the thousands of field recordings made by the Lomaxes in the 1930’s and held in the Archive of American Folk Song at the Library of Congress.

The transcriptions of the songs in Our Singing Country were painstakingly and lovingly made from those recordings over the course of four years by the composer Ruth Crawford Seeger.

My copy of Our Singing Country is an “unabridged republication” released by Dover Publications in 2000. “Wayfaring Stranger” is on page 37 under the main title of “Over Jordan.”

I learned about Our Singing Country from reading Ted Anthony’s brilliant 2007 book Chasing The Rising Sun – his “biography” of the folk song “House of the Rising Sun.”

After playing and singing and teaching “Wayfaring Stranger” for so many years, the time came to find out from whence it came. So, in March of 2018, I paid a visit to the American Folklife Center at The Library of Congress in Washington, D.C.

In the Folklife Center Reading Room, I was most fortunate to gain the knowledgeable and patient assistance of Mr. Todd Harvey, Collections Specialist in Reference at the AFC and Curator of the Alan Lomax Collection.

Thanks to Mr. Harvey, I was able to listen to several field recordings of “Wayfaring Stranger.” Among them was the November 22, 1936 solo vocal performance by L.L. McDowell – collected by Sidney Robertson & Charles Seeger – that was the source for the Our Singing Country transcription.

I was also able to look through a collection of documents that Mr. Harvey presented to me in a plain manila folder simply marked “Poor Wayfaring Stranger.”

Among these papers was a copy of an article titled “Poor Wayfaring Stranger – Early Publications” by John F. Garst. This article had originally appeared in the April 1980 edition of The Hymn – a publication of the Hymn Society of America, based at Wittenberg University, Springfield, Ohio. (Mr Garst’s day job in 1980 was as a Professor of Chemistry at The University of Georgia.)

This article answered all of my questions about “Wayfaring Stranger.”

Mr. Garst states that during his research on “Poor Wayfaring Stranger,” he “examined several hundred, perhaps a thousand, hymn and hymn-and-tune books of the 18th-20th centuries.”

The earliest publication that Mr. Garst found of the text of the song was under the title of “Going Over Jordan” in a 1858 book by Joseph Bever called The Christian Songster. 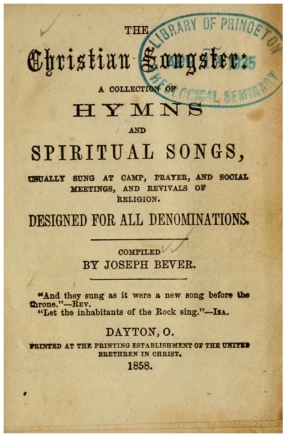 Mr. Bever presents Verse 1 of “Going Over Jordan” as…

I am a pilgrim and a stranger, while wandering through this world of woe;

But there’s no sickness, death nor sorrow, in that bright land to which I go.

…and these lines as the Chorus:

The earliest publication of the words and music together were located by Mr. Garst in a hymnal called The Revival by Charlie D. Tillman, published in 1891.

The Reverend J.L. Tillman was Charlie’s father. Evidently, the elder Tillman sang “A Poor Wayfaring Stranger” in the key of E-flat major.

Mr. Garst’s article also contained a reproduction of the first publication of “A Poor Wayfaring Stranger” with its melody as we now know and love it best: built (mostly) from the notes of a pentatonic minor scale. 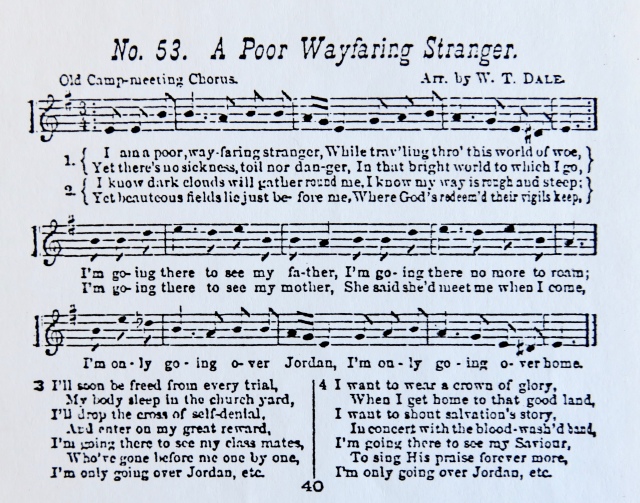 This transcription was from Times of Refreshing, an 1893 hymnal compiled by W.T. Dale. Mr. Dale credits himself with this arrangement of “A Poor Wayfaring Stranger.”

This is what the melody of Mr. Dale’s E minor setting sounds like. (It’s my guess that the flat next to the eighth note D in the first measure of the last staff is a typo, but I played it anyway.)

Also tucked in that plain manila folder was a thin yellowed paper pamphlet containing the music for “Wayfaring Stranger” written out in something called “the four-shape notation.”

This paper was a “song sheet” – number 9 of a series of American songs – issued by the Special Skills Division of the Resettlement Administration circa 1938. The song sheets were the idea of musicologist Charles Seeger as a way to help resettled families carry their musical tradition with them.

The first commercial recording of “Wayfaring Stranger” was done by Vaughan’s Texas Quartet. This male quartet with piano accompaniment was recorded in Dallas, Texas by Victor Records on October 9, 1929. The Quartet called their song “The Wayfaring Pilgrim.” Their melody and lyrics are similar to those in the Dale transcription.

The most recent recording of “Wayfaring Stranger” that I have heard was released in May, 2019. It features the always wonderful Rhiannon Giddens on vocals and banjo with Francesco Turrisi on accordion.

If you’ve listened to nothing else in this post, please listen to this. You’ll be glad you did.

Music this good certainly does not get old.