Rewriting The Record For The Electric Guitar Again

Posted on September 9, 2018 by sixstrstories

“On September 23-25, 1935, Leon McAuliffe, a brilliant player from Tulsa, Oklahoma, whose phrasing could have well influenced Charlie Christian, featured both electric steel and electrically amplified Spanish guitar on the first recordings of Bob Wills’s Texas Playboys.”

That sentence is from pg.15 of Talking Guitar: Conversations With Musicians Who Shaped Twentieth-Century American Music by Jas Obrecht. Pg. 15 is in the chapter titled “Guitarchaeology.” 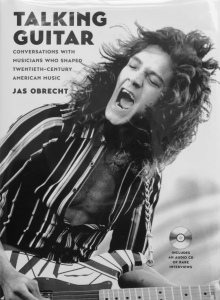 I don’t know why that sentence didn’t register the first time I read that chapter back in March, but it sure caught my attention this last time.

Those sessions started four days before Roy Newman and His Boys recorded “Rhythm Is Our Business” with Jim Boyd playing an electric Spanish guitar. (See my post of August 6, 2018.) 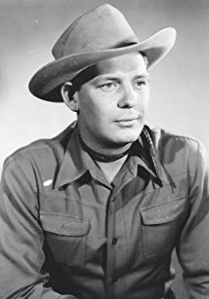 …is the first guitarist to play the electric Spanish guitar on record? 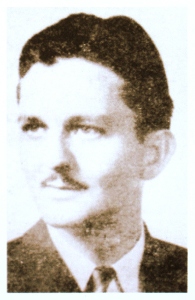 The complete listings for the September 23-25, 1935, Dallas, Texas recording sessions by Bob Wills and His Texas Playboys are on pages 176-178 in Discography Of Western Swing And Hot String Bands, 1928-1942. (by Cary Ginell and Kevin Coffey) 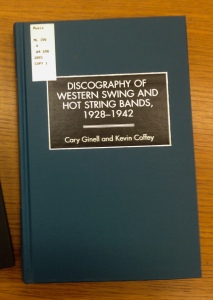 The line-up of Bob Wills and His Texas Playboys for those sessions was:

The sessions operated under the direction of Art Satherley, A & R man for the American Recording Corporation, parent company of Vocalion Records.

JTLYK: In 1935, the art and science of recording was about capturing a live performance. The recordings contained in this post capture the performances of a band of as many as thirteen musicians playing together in one room, carefully positioned around a single microphone.

In Dallas, Texas, circa 1935, that “recording studio” could be a hotel room, a church, an office, a banquet hall or a radio station.

Wherever the session took place, the musicians in those days knew full well that it was the expectation of the record company that they would give a good, releasable, approximately three minutes in length performance of each piece they played the first time they played it.

The second piece they recorded was the song “Get With It.” On this track, Leon McAuliffe played “electric guitar.”

In his liner notes for the 2006 Sony Legacy 4-CD box set Legends Of Country Music: Bob Wills and His Texas Playboys, Rich Kienzle writes that Texas Playboy vocalist Tommy Duncan wrote “Get With It,” by “adding original lyrics to the melody of the Mississippi Sheiks’ 1930 recording ‘The Jazz Fiddler.'”

Mr. Kienzle goes on to say: “While Bob Dunn played amplified steel guitar on records by the Musical Brownies, no country record had ever featured amplified lead guitar – until Leon’s solo here.”

Leon’s solo starts at the 1:49 mark, behind Bob Wills’ encouraging words: “Take it away, Mr. Leon! Play that guitar now.”

So there it is!

“Get With It” by Bob Wills and His Texas Playboys with Leon McAuliffe henceforth holds the title of “The First Recording To Feature An Electric Spanish Guitar.”

Before the September 23rd session was over, Bob Wills and His Texas Playboys made finished recordings of thirteen pieces. (Twelve of them only needed one take!) Leon McAuliffe contributed electric Spanish guitar solos to two of them: “St. Louis Blues” by W.C. Handy and “Good Old Oklahoma.”

Leon McAuliffe also played his electric Spanish guitar on five of the seven recordings the band made on September 24. Those five were: “Who Walks In When I Walk Out,” “Oklahoma Rag,” “Sittin’ On Top Of The World,” “Four Or Five Times” and “I Can’t Be Satisfied.”

In the recording session on September 25, Bob Wills recorded four fiddle solos accompanied only by Sleepy Johnson on acoustic guitar.

Out of those twenty-four recordings, the two that Vocalion Records chose to be on the first release by Bob Wills and His Texas Playboys were: “St. Louis Blues” and “Four Or Five Times.”

The first record anyone heard that featured an electric Spanish guitar was “St. Louis Blues” b/w “Four Or Five Times” by Bob Wills and His Texas Playboys.

William Leon McAuliffe was born on January 3, 1917 in Houston, Texas. He began playing both Spanish and Hawaiian (or steel) guitar at the age of fourteen and soon joined his first band, The Waikiki Strummers. After a short stint with The Light Crust Doughboys, Leon became a member of the Texas Playboys in 1935.

Leon McAuliffe recorded what would become his signature number – “Steel Guitar Rag” – with Bob Wills and His Texas Playboys on September 29, 1936, in Chicago, Illinois.

After serving as a flight instructor during World War II, Leon formed his own band called The Cimarron Boys. He recorded and performed extensively under his own name throughout the 1950’s and 1960’s, even reuniting with Bob Wills in 1973.

Leon McAuliffe passed away on September 20, 1988 in Tulsa, Oklahoma.

2 Responses to Rewriting The Record For The Electric Guitar Again