This songbook has been in my music library for many years.

Fred Sokolow’s excellent note-for-note transcriptions of 17 Chuck Berry classics have repeatedly proven themselves to be invaluable to me as a guitarist and as a teacher.

The Michael Ochs Archives photograph that graces the cover provides not only a fine portrait of Mr. Berry, but a tantalizing view of one of his guitars; a guitar that (thanks to my incredible children) I had the very good fortune to be able to see “in person” this past September. 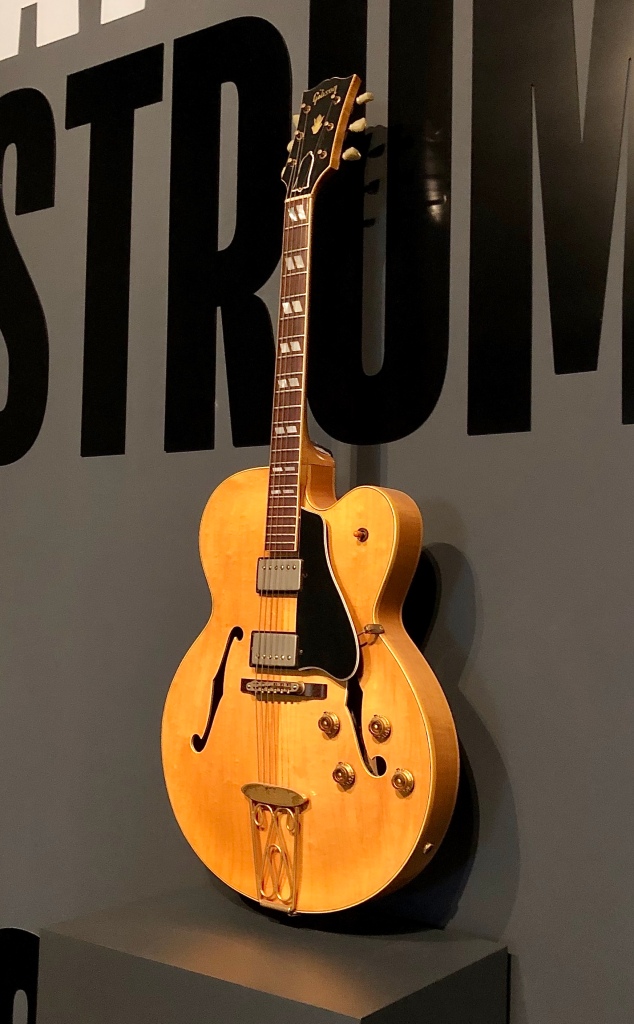 Play It Loud was an absolutely amazing exhibition of more than 130 instruments that filled Exhibition Gallery 199 at the Metropolitan Museum of Art in New York this past Spring and Summer. (My daughter, son and I were there on Sunday, September 29.) To be able to stand just a few feet – often just a few inches – in front of so many famous and historically important musical instruments was a truly breathtaking and unforgettable experience.

According to the exhibition catalog – by Jayson Kerr Dobney & Craig J. Inciardi – that Gibson ES-350T was “Chuck Berry’s main guitar from 1958 until about 1963.”

That means that Chuck Berry most likely played that guitar on this recording.

“Carol” was recorded on May 2, 1958. The musicians accompanying both of Chuck Berry’s guitar parts (listen closely!) on that track were:

4 Responses to This Historic Day In Music: Chuck Berry